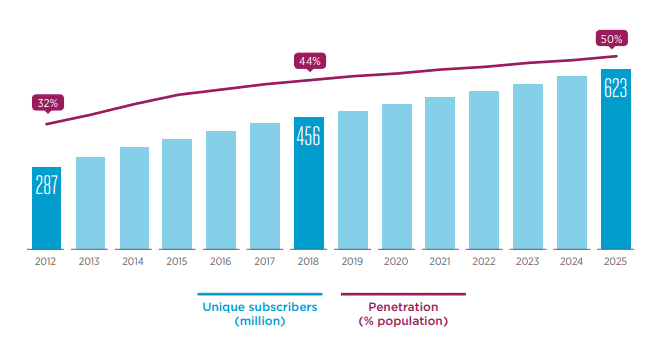 This growth in unique mobile subscribers will be mirrored by growth in the mobile ecosystem’s contribution to sub-Saharan Africa’s economy. In 2018, mobile technologies and services contributed to 8.6 percent of Africa’s GDP, or around $144 billion. This number includes the direct contribution of the mobile industry, indirect contributions from other sectors that benefit from mobile industry activity, and increases in economic productivity due to mobile activity.

Figure 2 shows that mobile’s contribution to economic growth will continue to grow in all of these areas through 2023, when the mobile industry will contribute almost $185 billion, or 9.1 percent of GDP, to Africa. The majority of this contribution will occur through improvements to productivity brought by increased adoption of mobile services. The mobile industry will also continue to be a major employer; already in 2018, the report states that almost 500,000 people were formally employed in the mobile industry and 1.2 million people informally employed, mostly in distribution and retail of mobile services.

Despite encouraging growth statistics, mobile inclusion remains a challenge across the continent. More than three quarters of the population—over 800 million people—remained offline at the end of 2018. Among this group, Figure 3 shows that about 300 million lack mobile coverage, while an additional 500 million have mobile coverage but do not subscribe to mobile internet. Improving mobile inclusion is important, as mobile technology can play a large role in development and economic progress. Mobile connectivity can, for example, enable better delivery of and access to services such as education, health, and financial inclusion. The report states that mobile has the potential to play a particularly large role in development in Africa, where it is more difficult to provide services using conventional means because of infrastructure and funding gaps. 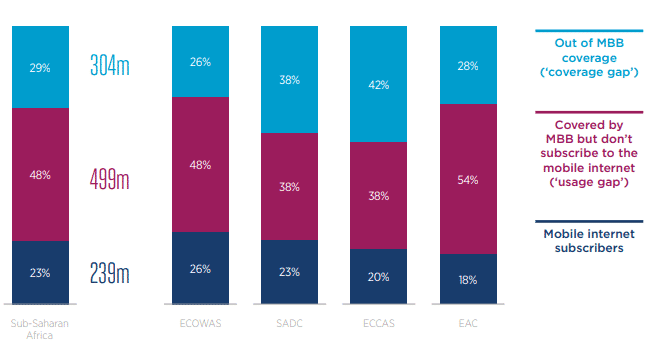 This blog post originally appeared on the Brookings Institution ‘AFRICA IN FOCUS’ blog. You can find the original through the following link: Figure of the week: Africa’s growing mobile economy.
Connected themes
Share this post

NWO-WOTRO Science for Global Development has awarded 22 projects within the WOTRO Impact and Innovation Grants (I&IG) that build on previously funded NWO-WOTRO projects. Two of these projects are led by researchers from former INCLUDE programmes.

By Hannah Itcovitz
Published on 26 May 2021
Africa Day: Beyond the Celebration

On 25th May each year, Africa Day is commemorated diversely in the continent and the diaspora. I would like to share some thoughts about what I believe must be an important day of reflection and re-commitment in our continent.

By Hannah Itcovitz
Published on 01 May 2021
What’s the latest economic research on Africa?

The CSAE conference received nearly 100 papers on topics from political economy, to service provision in health and education, to agriculture, labour, trade, and environment. This post by David Evans summarises the findings of these papers.