Since six years, the Knowledge Platform for Inclusive Development (INCLUDE) has become an important think tank, consisting of twelve leaders from African, and twelve leaders from Dutch organisations. Emeritus Professor Isa Baud of the Governance and Inclusive Development Research Group (University of Amsterdam) acts as its Chair. The African Studies Centre Leiden hosts its Secretariat under the effective leadership of Marleen Dekker and in collaboration with AERC in Nairobi and The Broker. Since its start I am one of the Dutch Platform members. On 28 April INCLUDE had its half-yearly meeting, virtually this time, with 31 people participating via Zoom, from all over the planet. Of course COVID-19 was a major concern. INCLUDE publishes a weekly update about ‘How COVID-19 affects inequality in Africa’[1]. In the meeting we decided about a new research programme, ‘Inequality and COVID-19 responses in Africa’, prepared by Anika Altaf.

The most surprising intervention during that virtual meeting came from INCLUDE-member Rolph van der Hoeven, Emeritus Professor at the ISS and member of the UN Economic and Social Council. Speaking from Geneva, he mentioned something that had escaped all of us: an opinion piece in the Financial Times of 14 April, titled ‘only victory in Africa can end the pandemic everywhere’ (paid access, or read it here)’. As a subtitle it said: ‘World leaders call for an urgent debt moratorium and unprecedented health and economic aid packages’. The plea is worth reading, but I would like to focus here on the people who signed it. 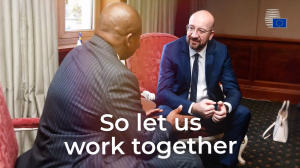 14 April was the period when the Dutch political leadership was perceived to be fighting against intra-European solidarity. At the same time, and surprisingly, the Dutch Prime Minister, Mark Rutte, was one of the EU leaders who had signed the plea for massive solidarity with Africa in the Financial Times. Who else were there? On the European side we see the leaders of the European Union (Ursula von der Leyen and Charles Michel) as well as six European leading politicians, one President (Macron), and four other Prime Ministers (of Italy, Portugal, Germany, and Spain). Absent were political leaders from the UK and Scandinavia, until recently always in the forefront of solidarity with Africa, and also absent were the prime ministers or presidents of Central and Eastern Europe. On the African side there were ten leaders who had signed, including Mousssa Faki, Chair of the African Union Commission. The others were eight presidents (Rwanda, Mali, Kenya, Angola, South Africa, Senegal, Egypt, and the DRC) and one Prime Minister (Ethiopia). There are 55 African countries in the African Union, so it is clear that the majority did not directly sign, and that included the leaders of two countries that so far had been hit most by the virus, Morocco and Algeria. But also the presidents of for instance Nigeria, Ghana, and Uganda were missing. Of course this could have been caused by ‘slow decision-making’ on their part (the deadline was fast), but all the same, I think that the combination of African leaders who signed this Call for Solidarity gives a very interesting ‘insight’ in the current intra-African positions of leadership in these very difficult times.

[1] In preparing my contribution for the INCLUDE meeting, I found a very interesting document, published 15 April, by GeoPoll: ‘Coronavirus in Sub-Sahara Africa. How Africans in 12 nations are responding to the COVID-19 outbreak’. Worth reading, also for its methodology.
This article was originally published by the African Studies Centre Leiden. A multidisciplinary academic knowledge institute in the Netherlands devoted entirely to the study of Africa. Access the original post here.
Connected themes
Share this post