All eyes on inequality in the 2020s

INCLUDE identifies the reduction of inequality as the core of its inclusive development agenda, as outlined in its 7 policy principles on inclusive development and its knowledge agenda. Development is not automatically inclusive, as wealth does not automatically trickle down through society in an equitable manner. Hence, the first and foremost policy principle is “to assess policies, programmes and interventions for their distributional consequences, not merely their absolute outcomes”.

While inequality has been studied for many years, there has recently been more attention paid to the detrimental socio-economic costs of high levels of inequality, such as the limits on economic growth, macroeconomic stability, and various social and political impacts. An overview of these is provided in this two-pager.

This wider acknowledgement of the issue is reflected in the frequency of recent high-level reports that centre their message around inequality reduction, including:

…and so on. The rising piles of evidence on the implications of current levels of economic inequality can no longer be ignored. 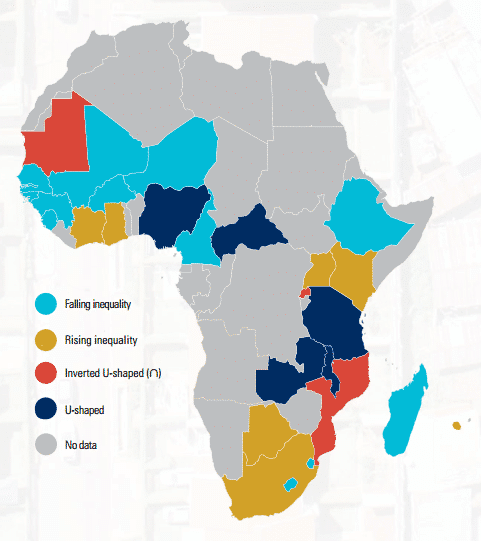 In the meantime, progress on Sustainable Development Goal (SDG) 10 – ‘Reduced inequalities’ – remains slow. The 2019 SDG progress report describes the levels of inequality within and among countries as “a persistent cause for concern, despite progress in some areas”.

Within the African context, inequality trends have varied significantly over space, time and level of development. Countries like Ethiopia, Mali and Burkina Faso have experienced drops in rates of income inequality (GINI) since the 1990s, while particularly the southern part of Africa has experienced the opposite (with the exception of Namibia). Figure 1 shows the various trends of inequality since the 1990s, where several countries have seen their inequalities increase and then decline (inverted U-shape) or vice versa (U-shape). The relationship between economic development, poverty and inequality is heterogeneous, with some countries experiencing large drops in poverty, yet rising inequality, and vice versa. Moreover, countries in the Sahel with low levels of inequality have higher levels of human development.

With 10 out of the 19 most unequal countries being located in Africa, the reduction of both income and non-income inequality is a top priority for the continent. Despite the abundance of evidence, inequality reduction has not yet become a priority for policymakers, as it is amongst knowledge institutions. While the drivers of inequality reduction are somewhat country specific, it is clear that countries that make little attempt to reduce inequality are seeing inequality increase. Having already been underway for five years, achieving SDG 10 on inequality, thus, requires national governments, particularly those with largely dualistic economies, to seriously step up their game in the 2020s. And the publications listed above describe numerous ways for them to do so, including social protection, progressive taxation and labour policies.

Causes and consequences of income inequality: a global perspective

The costs of extreme inequality are increasingly being acknowledged in development agendas for Sub-Saharan Africa.…

Policy highlights: The authors of this blog state that although Goal 10 of the Sustainable…

By P van Bergeijk and R van der Hoeven
Published on 21 March 2018
What to do about rising inequality in developing countries?

Policy highlights: The lack of transparency about the dynamics driving inequality and the extent to…